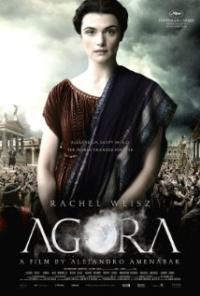 Alexandria, 391 AD: Hypatia teaches astronomy, mathematics, and philosophy. Her student Orestes is in love with her, as is Davus, her personal slave. As the city's Christians, led by Ammonius and Cyril, gain political power, the institutions of learning may crumble along with the governance of slavery. Jump ahead 20 years: Orestes, the city's prefect, has an uneasy peace with Christians, led by Cyril. A group from the newly empowered Christians has now taken to enforce their cultural hegemony zealously; first they see the Jews as their obstacle, then nonbelievers. Hypatia has no interest in faith; she's concerned about the movement of celestial bodies and "the brotherhood of all". Although her former slave doesn't see it that way.