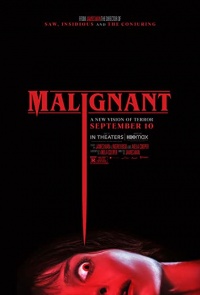 Seattle, 1993. Dr. Florence Weaver and her colleagues Victor Field and John Gregory take care about a "patient" with special abilities than dangerous so his wish to make evil, practicing a special operation hoping to prevent a potential threat for the society. 28 years later, a woman named Madison Mitchell is unhappy: she is married with the abuser and violent Derek, and she is pregnant in her third attempt to be mother for disgust of Derek, that he doesn't wants to be father. After a strong discussion, Derek hits Madison and he crashes her head against the wall, making her bleed by the nape. Taking advantage of a brief moment that Derek leaves the bedroom Madison locks herself on it trying protect the fetus, but when this night she is sleeping in the bed and Derek sleeps in the couch, Madison is shocked by the nightmare of a stranger who enters in the house and violently kills Derek. Waking up due to this vision, she downs the stairs just to discover Derek dead as in her nightmare. With the killer still in the house, Madison run away to the bedroom looking for protection, but the killer breaks the door that she was blocking, launching both door and Madison to the other side of the room, leaving her unconscious. While at the house appear police detectives Kekoa Shaw and Regina Moss after a call of the neighbors, Madison wakes up in the hospital to find her longtime stranded sister Sydney Lake, discovering that she lost the baby again. After to be interrogated by Shaw and Moss (and not finding evidences that she killed Derek) Madison returns to her house, but horror too: a further lucid dreams cause that Madison watches as the assassin kills a woman, who results to be Dr. Weaver, as well as Fields and Gregory. Trying to explain the visions to Shaw and Moss, Madison finds herself as the main suspect of the crimes, making that she and Sydney investigate by themselves after the assassin calls Madison and suddenly she refers him as "Gabriel". Meeting with their mother Jeanne, Madison asks her information about her biological mother and Gabriel, learning about an evil imaginary friend when she was child which caused that she was interned in a mental institution named Simion lead by Weaver, Fields and Gregory. While Moss convinces Shaw that Madison is the killer and he arrest her, Sydney goes to Simion to prove her innocence, just to discover that Gabriel is much more real than a simple imaginary friend and more terrifying than anyone could be imagine. —Chockys